Go ahead and take a look at your favorite Bodybuilder.  Go online or look at his interview in the latest Muscle And Fitness or Muscular Development magazine to find how he’s training for his next competition and more times than not, you’ll find that he’s using a split routine consisting of chest and back one day, followed by shoulders, calves and abs on another day, followed by arms and chest again, followed by legs and abs, etc.  This’ll be split into five days, involve multiple exercise per body part for 3 sets of 12 each,  sometimes followed by multiple drop sets, in order to hit each muscle for “all angles”, followed by plenty of time on the treadmill.  Some professional Bodybuilders will even train twice a day.  If you ever watch Ronnie Coleman’s old training videos from the early 2000’s, you’ll know that not only did he train twice a day, but he also organized his routines for different goals.  While training for the Mr. Olympia, Ronnie would use one training session to focus solely on strength, using only barbells and dumbbells; in the next sessions, he’d solely use machines and cable exercises for hypertrophy purposes.

However, I’ve noticed somewhat of a change in training philosophies lately, at least with some of the most popular online fitness personalities.  It started with articles written by Dr. Jim Stoppani, PhD. , who after pretty much preferred split routines over anything else was suddenly singing a different tune!  In an article he published last Halloween, entitled 4 Reasons You Should Be Doing Full Body Training, Jim discussed aspects such as greater fat loss, greater improvements in strength, and a recent scientific study that suggests that training the major muscle groups every training sessions will bring on gene activation, which in turn can prevent numerous metabolic diseases.  Scott Herman of Scott Herman Fitness has also been enthusiastically touting the benefits of Full Body training lately, and is even preparing to release a brand new Full Body routine on his website as I type this.  Might include plenty of Bah-bell work!

While much smoother looking than his more rugged counterpart, Reg Park, Steve Reeves also training using a full body routine and still was incredibly sculpted!  And much like Reg, he’d also go on to play Hercules in the movies.

It’s nice to see that full body training is finally getting some attention, at least on social media.  But is this approach new?  Of course not!  Full body training, for the longest time, has been considered the go to approach for beginner and intermediate lifters.  What you might not know, however, is that some of the most popular bodybuilders of yesteryear relied solely on full body training to attain very impressive, sometimes powerful physiques. 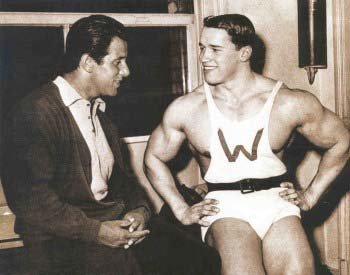 Clearly you don’t need to me to tell you who the young man on the right is.  But the man on the left is that young man’s idol, iconic British bodybuilder Reg Park.  Reg has the distinction of being the first bodybuilder to compete at a bodyweight over 200lbs and with a very rough, rugged build, as well as being the second person and first bodybuilder to ever bench press 500lbs.  And how did he do it?  By training his entire body every session, as well as using a now well familiar set and rep scheme of 5 x 5.  Reg was very ahead of his time, believing that in order to gain size, you had to get stronger.  The best way to do this was to focus on multijoint movements, the squat, bench press and deadlift in particular, which other moves added in afterwards to prevent muscle imbalances.

Steve Reeves was Reg’s smoother, more aesthetic counterpart in the Bodybuilding world.  He too was a fan of full body training.  However, unlike Reg, Steve had organized his own approach to training in this way, starting with training the shoulders first, and then gradually working his way down to the legs, knowing full well that performing a big upper body exercises after squatting, for example, would not be easy.  Steve was also a big fan of cardiovascular health, advocating power walks up to four times day.  Here are just two examples of old school bodybuilders who trained in this fashion and achieved amazing results.  But as history shows, by the 70’s and 80’s, full body training had cleared the way for split routines used by everyone, especially Arnold, Reg’s own protege.

So why resurrect full body training philosophies now?  Referring once more to Jim Stoppani, I had the opportunity to hear him speak about the benefits of full body training this past April at the Philly Expo.  Using the chest as his prime example, he said that if you were to continue hit that muscle with four exercises, from “all angles”, and then not touch it again until the next week, that muscle would essentially waste away as if you never even touched it.  And it does make sense when you consider that the chest is not a muscle we use as often as the legs or arms.

However, let’s spread that out now.  Let’s now spread the volume across three days, using one different, quality exercise per day.  So let’s say you bench on day one, perform dumbbell bench press on day 2, and then perform dips on day 3.  You’re chest is now being forced to grow because, even though you’re not burning it out with multiple exercises, you’re not giving it a chance to rest either.  Lee Haney used to say “stimulate, not annihilate”.  Also, because you’re performing just one exercise, it would behoove you to perform more than the popular three sets as a means to recruit more muscle fibers, prompting the muscles to react.

One of the reasons full body training is highly recommended for beginners and intermediates is because some of the most popular strength programs for beginners, such as Starting Strength, which I recently used after coming back from a torn wrist cartilage, has a major emphasis on the posterior chain, especially with the squat.  With constantly stimulating my legs alone with only two exercises, I was able to bring my squat back to 290lbs and my deadlift back to 325lbs in just three months.  Then there’s Stuart McRobert’s iconic 1991 hardgainer bible, Brawn.  McRobert used Brawn as his opportunity to revive classic full body routines such as the dreaded 20 Rep Squat routine for a new generation led astray buy mainstream bodybuilding magazines.  In fact, I’m currently in my third cycle of Jim Wendler’s Beyond 5/3/1 program, under a full body template.  Therefore, not only am I still training legs three days a week, albeit a different exercise each day, I’m now training chest twice a week and shoulders three times a week (two of those days are through the chest exercises).

Having said that, yes, more advanced lifters can absolutely benefit from full body routines.  My own father, who trained in R & J Health Studio, that infamous Brooklyn dungeon gym seen in Pumping Iron, was taught to train in a full body style while transitioning from Bodybuilding to Powerlifting and still managed to achieve squat and bench press numbers in the 400’s, all while maintaining a well sculpted, yet powerful physique at 200lbs.   But at some point, you’ll have to organize your training based on your own individual needs a schedule.  Full body training can be tailored for specific goals, whether it be strength , power, hypertrophy or all three.  It also has to be tailored to your own time frame, which Stuart McRobert stresses throughout most Brawn.

In fact, I’ve been considering switching from a strength focus to a hypertrophy focus after my next 5/3/1 as a short term goal toward my long term goals of being as strong as I can.  I plan on doing this by spreading out my usual three day per week routine into a four day routine spread over a three day week, enabling to focus more on building size while enjoying a longer recovery time between the big movements.  So here’s an idea that most of you can probably benefit from:

As you can see, the exercise selection is comprised of quality movements, movements the recruits the most fibers, accruing the most damage, and signaling the most growth.  The Specific Adaptation of Imposed Demands states that the body will adapt to the stresses placed on it.  So why not stress it as much as realistically possible?  The one constant, inspired by Reg Park, is that you’ll always start each training sessions with Hyperextensions.  This will provide you with a gradually stronger lower back and hamstrings, which will benefit you later on as the bigger compound movement become heavier.  I blatantly did not provide a set and rep scheme, for this is just a general outline.  You must determine the sets and rep ranges based on your own personal goals.

A generally recommended rep scheme, however, would be six sets of six to eight reps.  As mentioned earlier, since you’ll now be focusing on only one exercise per body part, there’s no need to just stop at three sets, as you won’t need to move from one exercise to another for that part.  Therefore you can perform enough work to ensure that you’re attaining the volume you’ll need to grow.  Remember that, if you’re training one exercise per body part, three times a week, using as many as six sets each exercise, you’ll spread your training volume by about 50%, a point brought up by Jim Stoppani in April.

If this article has peaked your interest in full body training, and you’d like me to help you create the ideal routine for you, do not to hesitate to contact me in the form provided at the bottom of this article.  Thanks for reading!